So I enjoyed both an authentic Greek salad and olives while in Greece. However, I ran out of time to get my Gyro! I know, I know – how could I be so careless? I guess it just means we will have to go back again…

One of the best parts of our stay in Athens was our AirBnB. We had a huge covered patio with direct access to our own rooftop 360 degree view. From our patio we were able to see the Acropolis (and for whatever reason my camera makes it look further away than when you are actually standing on the patio looking at it.)

I am so happy we made it to Greece this year. We walked up to the Acropolis in time for sunset, and looked out over Athens. It’s been a whirlwind of an adventure from one city to the next in such a short amount of time, but views like this make it worth it. #greece #🇬🇷 #athens #acropolis #travel #adventure #sunset #couplegoals #travelholic #photooftheday #instapic #instaphoto

There we’re so many cats!

The Big Trip in Small Clips!

This short video only has clips from some of the trip! Not even all of it. We took over 200 videos with almost 2 hours of short clips from around the country, picked some of our favorites and condensed those into 2.5 minutes.

Keep checking back to the blog! There are two more posts from the trip. There will be other videos to be posted from the trip as well!

The Great Race East began. We had 5 days to get from Seattle to New York. Luckily our friend wanted to make his way to Montana too, and so he drove the whole there. We had to stop and put chains on our car to get over the Great Divide… but aside from that terrifying drive it wasn’t as bad as expected. The expected being that we wouldn’t be able to drive on hwy 90 at all in a compact car, all attempts would be fatal. The whole drive to Montana the boys talked in a Canadian accent. As a matter of fact, Adrian kept the Canadian accent for the rest of the trip through the Northwest, and every time he called a hotel he spoke in said accent.

To pass time we played yahztee in the car (yes, imagine this). We found gas at the cheapest price (2.69) in South Dakota. I was really excited that we were going to get to see Mount Rushmore, after all; something I’ve dreamed of doing since I was a child. Still a little sad that we had to miss the Grand Canyon, the Redwood forest, tons of things in San Francisco, Adrian’s skiing in Colorado just because we had to get back in time to pick up the car. I didn’t even get to spend as much time as I would have liked admiring the sculpted President’s. It just means we will have to take a more detailed Northwest Adventure trip in the future ; )

As we left Mount Rushmore, Adrian laid his seat back to take a nap. I entered highway 90. Cruise control set on 69mph in a 65mph zone. I passed a police officer in the fast lane, out of respect I turned my cruise control off and dropped to the legal speed limit. Other cars around me are going much faster, a white car in front of me was speeding much faster than I as we got closer to a 75mph zone (which only a local would know was up ahead). Then the police officer pulls out. Typical of my nature I panic, which I do every time a cop pulls out. I wake Adrian and he asks if I was speeding? Well, 4mph over. Then he’s not going to pull you over.
The lights come on… I look behind me. I get over to let the cop pass. He pulls behind me.

Is he seriously pulling me over for 4mph over?

Moral of the story, don’t speed at all in South Dakota. They are bored. They will pull you over. I didn’t get a ticket, but I did waste 45 minutes of my time. You see, I get upset at just the thought of getting pulled over… so then I start talking a lot. About EVERY THING. That poor police officer didn’t know what he was getting into. I am shaking compulsively, talking his ear off… he knows my whole family history and every thing about the road trip.

Because we were pulled over and wasted so much of our time we decided to get a motel. We stopped at a place in MN… sketchy. I am not sure if it was a hotel or someones shed built onto a home. LOL.

You know it is a long trip when you are reminiscing about the trip you are still on.

I have found that the spiritually mature look nothing like the world’s typical adults who have lost their hopes, dreams, passion and vision and are looking to finish their days in quiet retirement. -Outrageous Courage

After staying at the shed we finished the trek to Albany. It was nice to see family, some for a second time on the trip. 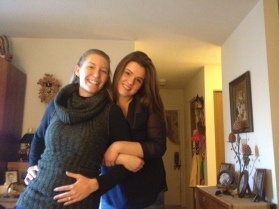 Oregon was a stunning drive. We were worried there would be snow on the road in January. The warm weather has kept it at bay. All we saw was the immense volcano off in the distance. The drive over the lake was extraordinary through Shasta National Forest! There was some fog but it never hindered […]

I left my heart in San Francisco

I left my heart in San Francisco. More like; I left my wallet in Las Vegas, our backpack in San Diego, and my purse in Sacramento. Don’t get me wrong, San Francisco was beautiful. We were only there for a short time though. In the morning we headed down Haight Street (which Siri pronounces as […]